We Have a Lift-Off: Maple Seeds Teach a Drone How to Fly

In its quest for survival, nature has devised a thousand ways to optimize species reproduction. In the case of mammals and insects, species usually go in search of a mate, but a plant has more restrictions. Typically, the plant kingdom depends on other species, such as bees, to pollinate flowers or birds as messengers of their seeds. However, in some cases, plants and trees opt for solutions closer to aerospace engineering. This is the case with the structure of maple seeds, which have inspired a new technological breakthrough based on biomimetics.

A drone inspired by the seed “helicopter”

The light maple seed, falling from the tree in a spinning motion, is sometimes described as one of nature’s helicopters. And that is what three scientists from the City University of Hong Kong looked at when they wondered how to increase the flight range of a lightweight drone. Specifically, their device weighs less than 100 grams.

The approach of the new drone is to dispense with a helicopter-based central rotor and instead install two rotors at the tips of the blades. These blades are identical in design to maple seed pods and offer remarkable stability with very low energy expenditure.

The prototype weighs thirty-five grams, and its blades rotate at 200 rpm, keeping the device in the air for twenty-four minutes thanks to a small battery. The direction of flight can be controlled simply by changing the speed of each rotor.

The model they have developed can carry small payloads of just over twenty grams and has been tested with a miniature camera, which would allow it to be used for mapping or monitoring spaces. The paper on this innovative device has been published in Science Robotics.

The striking aerodynamics of maple seeds

As it develops, the seed of the maple tree is covered by a v-shaped sheath. At first, while still green, the seed falls like a stone from the tree. However, as it dries, it loses water and weight. When it reaches the point of optimum maturity, the seed is ready to take a flight to other latitudes. Perhaps not as far as a migrating bird, but maple seeds have reportedly traveled up to four kilometers. How do they do it? 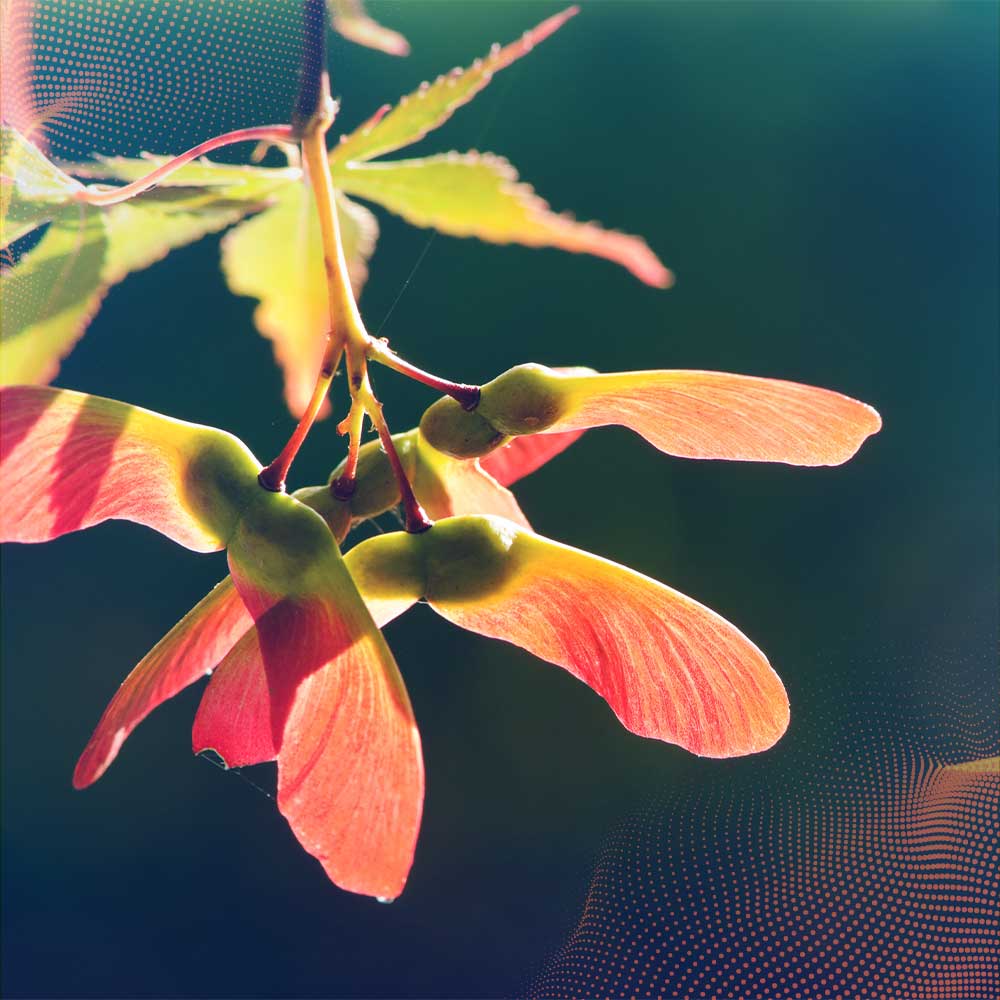 The secret lies in the structure of their “blades.” As revealed by a wind tunnel study published in the journal Science, the maple seed blades generate lift, i.e., the same force that allows airplane wings to take flight. Thus, when falling, the thin maple seed blades generate a miniature vortex that keeps them in the air longer. In addition to the Hong Kong scientists’ drone, there are other flying, biomimicry-based, systems such as this Airbus aircraft.

In times when sustainability is an integral value of business projects, it is not surprising to see the emergence of a new figure: the Director of Biomimicry. If biomimicry enables the implementation of sustainable solutions in industrial designs, why not introduce this perspective into all the processes of a company?

That’s the logic behind Jamie Miller’s appointment as director of biomimetics at a Canadian architectural firm. Miller, who studied with biologist and biomimetics pioneer Jenine Benyus, is already integrating biomimetic solutions into his firm’s projects.

Specifically, they have already applied biomimetic solutions in residential buildings in places like Ontario and Gabon. For example, they have designed a house in India that uses cooling solutions based on elephant skin and termite mounds, and a garden emulating a forest ecosystem.

Miller also talks about how spider webs or mangroves can provide inspiration for creating more energy-efficient structures. Thus, spiders can create an extremely resistant material with hardly any energy expenditure, unlike conventional materials such as concrete. In fact, this expert believes that biomimetics could be one of the greatest weapons in the fight against climate change.

If you want to learn about a biomimetic architecture project that integrates this approach, you should check out this article.

This Machine Pulls Drinking Water Out of Thin...

A Wind Harvester Could Power the Future...

Robotics for a More Sustainable World